This article looks at how people who answered the safeword survey said they used safewords and whether this differed for older or younger respondents.

The survey, of course, isn’t representative of anything except the views of people who took part. It’s important to note that some of the age groups are quite small. There were only eight people aged 18-20 (all were women) and four over 70 (all men). The other groups ranged in size from 77 to 148 so are more likely to reflect a spread of opinion (496 of the 533 people in the sample answered the question). 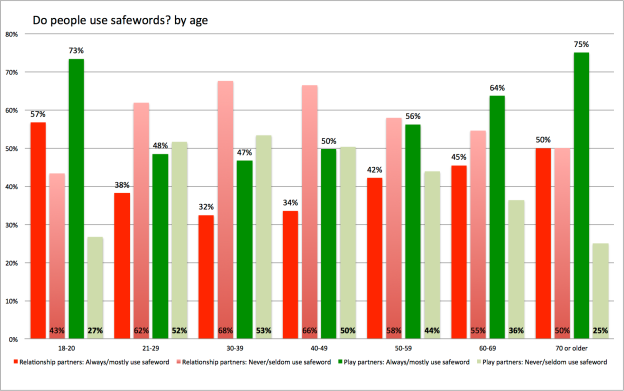 Only 18-20 year olds were more likely to use safewords with both relationship partners and with pay partners.

Over all the age groups, when it came to relationship partners, every group except the 18-20s said they were more likely not to use safewords (other than people of 70 or older where the decision was split 50-50).

Data for this article

The data for this article was compiled from that contained in the table below.

This article can be compared with an earlier one, looking at how people use safewords with their principal relationship partners.