Three stopped speaking, put her feet together,and then placed her left leg behind her right and dipped, keeping her back straight, her arms behind her back and her eyes on the floor. She took a step back, turned away and returned to the chair.

After a moment, The Girl turned to Five. Minny looked away, then smiled, tentatively.

“True.” The girl opened Five’s folder and took out her kink-o-gram. “But of those left here – definitely least. But that doesn’t mean you don’t have a certain appeal. He thinks you are fresh meat. And, there is a certain something in naivety.”

“There’s something else” asked Five/Min. “Why are there only four beds and sleeping bags next door. Its’ like you never intended to have everyone here?”

“That’s true. He didn’t.The first cull was always going to be at the station. It wasn’t whimsical either. He thinks the last four would get the right idea if he sent one home early. And he thought that one of you, at least, would give a disastrous first impression. He’s my man right or wrong, so it’s not for me to second guess – but I would have picked the same woman to send home. She was disobedient, full of herself and out to snare an impressionable Dom with her subly whiles. A little bit like Two, here – but much more obviously intolerable”. 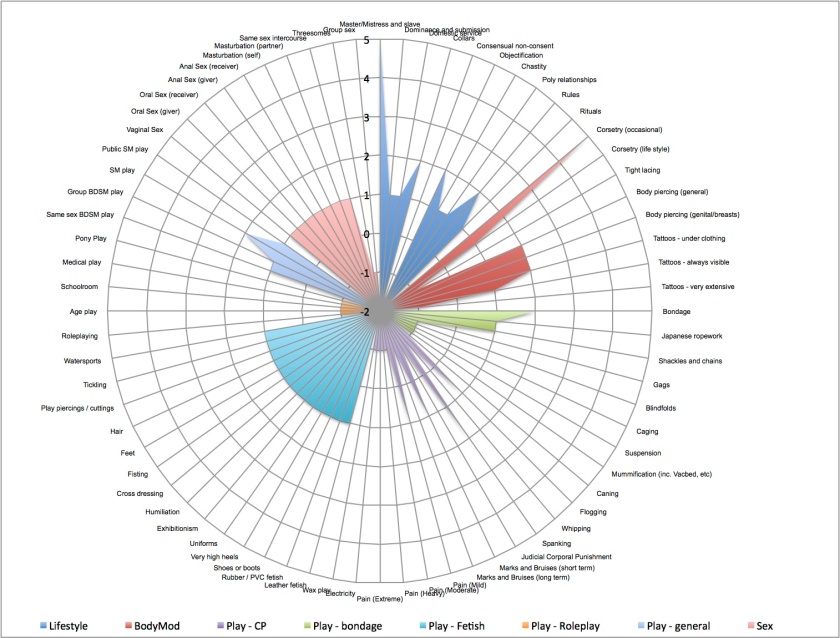 Five’s chart was quite different from the others. Only in two areas did the stripes of the kink-o-gram reach the edge – she’d scored fives for “Master, mistress and slave” and “corsetry – occasional”. Very few of her other scores exceeded one out of five. Some had minus scores.

“He thinks you are interesting five. Your kinkiness quotient is absurdly low at 15% and it only gets that high because your lifestyle score is 28. Your score for interest in sex is four times your interest in play, which is something I suppose”.

Five felt humiliated and didn’t like it: “It’s all right for you lot,” she shouted and rushed into the bathroom, slamming the grill “you’ve done this stuff before. I haven’t”. Five twisted out of sight. Unseen, she slumped to the tiled floor.

The Girl stared at the grill and then looked at the other women, putting a finger to her lips.

Once or twice one of the girls made to speak but The Girl made a sign for silence.

“I tried to be honest. I don’t know if I’m going to like any of this stuff you or your bloke want to do to me. I think I do – but I don’t know. So I said I was unsure because it’s true. Because I don’t know”.

“And I said I liked Master, mistress and slave because I thought that would be what you were looking for. But, honest, that’s what I think I want too. I want to belong somewhere and belong to someone and I don’t want to be on my own”.

“And I put corsets down because it’s easier than dieting. I know I’m too curvy, but I reckon I’d look like Betty Boop if you cinched my middle in. I’ve got good boobs and a nice round arse. I can look ok”.

“And, I’ve read every book I could find on this sort of life. So, even if my chances are fucked I’m staying. I’m going to get everything I can from this weekend”.

Min thought she should have said that life for her had always been about someone else, but not about her. But she said nothing more.

A gong sounded from the main house. “Dinner time.” said The girl.